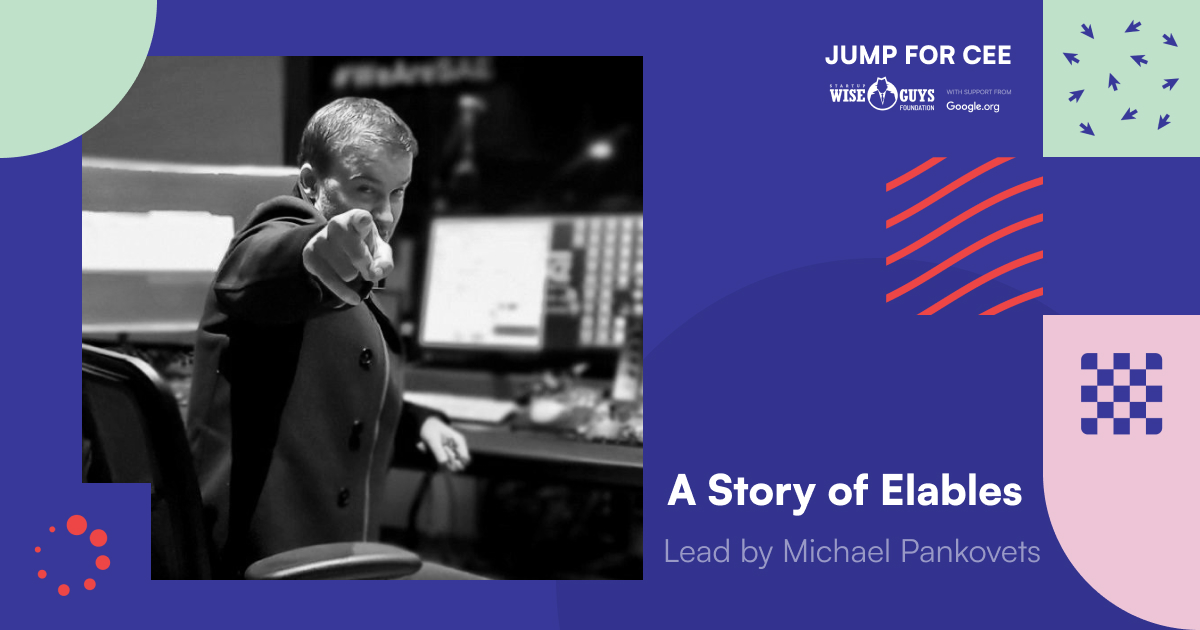 A Story of Elables: How Joining a Pre-Accelerator Program Can Make You Realize You Have the Wrong Idea

You’ve probably seen our inspiring story of Fairytales—a startup that joined our latest Jump for CEE program to find its final shape and take a scaling path.

But sometimes, coming to a pre-accelerator program might lead to a completely different development—you may realize that the hazy idea you were thinking of setting your life to might not be the one. And that’s valuable in its own way.

That’s exactly what happened to Michael Pankovets, an ideator behind Elables, and we’d like to share his curious story of realization.

Michael Pankovets, a Canadian with Ukrainian roots, came to Riga, Latvia not so long ago. And he saw one area he could improve—Latvian stores were still doing a lot of things the old way, and that was neither cost-effective nor sustainable. So he, having an entrepreneurial mindset, came up with the idea of changing paper shelf labels towards Electronic shelf labels—to cut store costs, increase the stores’ net profit, and positively impact the environment.

With little to no entrepreneurial experience, Michael decided to join Jump for CEE—a pre-accelerator program that was precisely designed to equip aspiring entrepreneurs with everything they need to bring their idea to life.

And…as it turned out over the course of the program, Elables simply didn’t ignite that spark needed to overcome all the challenges.

“I was surrounded by people who were really all fired up about their startup ideas—you had guys who wanted to do something in the field of cybersecurity or fintech, or anything else. And I realized that I lacked that level of motivation and involvement with my initial idea”.

Apparently, being around fellow startuppers who were doing exactly what they believed in made Michael realize that he wasn’t off to a great start—you have to have a real drive for your idea to make it happen.

The mentors and hours-long discussions only proved this further. While his startup idea did pass the validation check from the mentors, it failed to pass this same check for Michael himself.

“I got to talk with a lot of industry pros—and they actually liked my idea. It wasn’t anything brand new but there was definitely some market potential for Elables. Yet…what I realized while seeing all these other startuppers was that I simply wasn’t all that interested in retail. You have to build a company, not just for the sake of being a founder, but to solve a problem you are actually passionate enough to resolve”.

This might seem like an obvious statement but sometimes you have to be pushed and see what it actually takes to build a startup and scale it to change your course.

“The online workshops really revealed what it might feel like being an entrepreneur. They give you a structure as well as a step-by-step approach to starting a business—any kind of business, from an innovative B2B tech startup to a nail salon. So I’d say joining such a program is valuable in itself—just to see what having a startup might involve and require from you”.

This role-play side of the journey helped Michael understand that one can only sign up for all the adventure and trouble associated with building a company if they have the right idea. But, he also shared the knowledge-intensive side of Jump for CEE gave him all the needed framework for building a business.

Sometimes the educational part of the journey can unveil that you aren’t in the right place or with the right idea. And thanks to Jump for CEE, Michael figured this out.

With years of experience in the music industry—from producing to actual music creation—he realized that if it’s the music he’s so passionate about, he should stick to what he loves and try to build a startup tailored to that industry.

“I do have an idea now—and I think it’s something I want to be doing ahead. I know the music industry and its challenges. I want to build a tech startup now that can transcribe chords from voice recordings. As in, you can hum your melody into a smartphone and it will translate it all into the right chords. This should help both pros and those without much technical musical acumen write music”.

While Michael isn’t sure whether it’s feasible to build such technology, time will tell. What we know now is that after the pre-accelerator Michael now has the knowledge and structure to develop the startup he wanted to build. And the moral of this story is that you should sometimes take your idea to a trial before dedicating all your time and resources to bringing it to life. And Michael was fortunate enough to stop at the right time and avoid too many sunk costs.

If you want to validate your idea—not just for mentors but also for yourself and gain more knowledge to bring forward your it-idea, make sure to join the next batch of Jump for CEE, and see where it leads you.

From Fairytales for Immigrant Children to Extreme Tourism: How Jump For CEE Changed the...