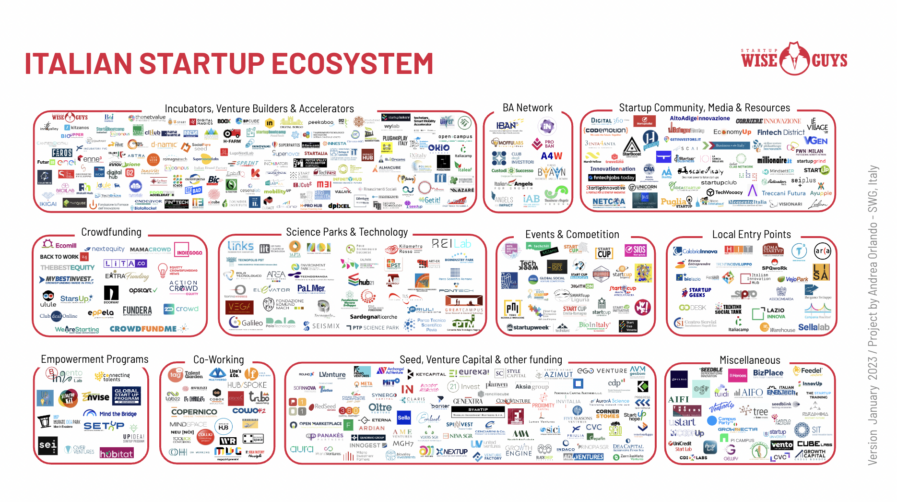 Startups and digital entrepreneurship: The changes and reforms we would need for a real change

According to the Mise report, 2021 closed with sustained growth in entrepreneurial activities, reaching the threshold of 332,596 new entries in the Business Register, with an increase of +14% more than in 2020. The South is the area of the country that saw – in the last year – the highest number of registrations: 109,000 new companies born last year, compared to around 72,000 terminations.

A growth that represents the emblem of the potential of the Italian entrepreneurial fabric, above all if one looks at a country – Italy – which has historically always been “slowed down” by the cumbersome, and often inefficient, bureaucratic apparatus, with an inevitable negative impact for the startups, in terms of economic resources and time.

Indeed, an analysis of sector data revealed that Italians need to work on average for 11 weeks, 4 days, 5 hours, and 42 minutes to have the money needed to start a new business, while the British, on the other hand, 1 hour and 21 minutes is enough: to start a startup in Italy, on average, 3,941 euros are needed compared to 14 euros in the United Kingdom and it is not surprising that the Bel Paese ranks last among the 35 countries examined.

A structural limit that inevitably holds back investments by foreign Venture Capital. According to the survey by TechChill, a non-profit organization born in Latvia and operating in the world of innovative companies – which also recently inaugurated its Italian branch (TechChill Milano) – most investors would be ready to finance Italian startups if an opportunity suitable for their portfolio presented itself, and a third of them have already supported the growth of at least one Italian startup. The main obstacles reported, as expected, are bureaucracy (50%) and an ecosystem that is underdeveloped and disconnected from the ecosystems of other countries.

If you’d like to see the Italian Ecosystem map in high resolution, please, sign up for our Monthly newsletter.

So what are the – concrete – changes and reforms we would need for a real change in the Italian ecosystem of startups?

Among the many countries that are investing in blockchain technology, Estonia plays a prominent role, especially in the digitization of public administration. To understand the effectiveness of the Estonian E-Government, just look at the numbers: the entire national territory is equipped with an internet connection, over 99% of public services are online and 98% of the population has a digital identity, so much so that the motto “only getting married or divorced and selling real estate cannot be done online” has been adopted. Establishing a digital identity card would allow startups and entrepreneurs to easily access all PA services and reduce many of the obsolete bureaucratic processes.

To encourage and “find out” talent, it is necessary to focus on engagement and direct involvement: for example, to test the appetite of young people toward the entrepreneurial path, it would be necessary to go to schools and create a culture of entrepreneurship, organize summer camps to attract future young entrepreneurs and allocate tax relief for families for targeted training activities.

For example, I would eliminate the PEC for startups (but in general for all companies) in order to guarantee them a more streamlined digital incorporation method (for example a digital mailbox connected to the SPID), as well as simplify the bureaucratic processes that it would also make it possible to save on legal expenses which are burdensome for early stage companies and, above all, divert funds otherwise destined for initial investments.

4. Reform the civil code by adding a new section

The civil code is obsolete and sometimes cryptic and captious. With the intention of guaranteeing rights to the parties involved in a negotiation, it sometimes slows down, confuses, and dissuades. Even when attempts have been made to modify it, the objective of modernizing it and using a language that has changed and is changing in the meantime has never been fully achieved. Who will have the audacity to reform and update it by thinking of the society and the economy of the 21st century and no longer with the inspiration, albeit precious, of Napoleon?

5. Set up a growth hacking campaign on the Italian startup brand

It is a long-term job: it is necessary to identify role models that can be intercepted by young people, to share success stories to create value within the community. Startups, for example, once they have reached an adequate level of growth, can become successful cases capable of inspiring and involving many young people. This approach, however, cannot be left solely to the private initiative of companies and their communication work; a push from the institutions is needed to sponsor new role models, capable of guiding future entrepreneurs.

6. Entrust the Business Register to the Crowd

To build a virtuous ecosystem of startups, it would be necessary to start from the basics, entrusting the task of selecting young companies – which meet the requirements to be defined as “innovative startups” – to 1000 selectors throughout Italy with expertise in the field of innovation. In this way, the bureaucracy would be relieved of a complex role that requires vertical skills which are often lacking; not only that, it would avoid precluding important development prospects to promising realities and granting benefits and concessions to startups with little growth prospects, preserving us from the current scenario in which we find ourselves now, where of the over 14,000 “official” startups many have had access to the Register by chance or due to incompetence of the body in charge.

The MISE has currently suspended VISA startups, the Italia Startup Visa Program is a strategic tool for attracting talent and innovation to our country: in fact, it is aimed at entrepreneurs from non-EU countries who intend to start up in Italy, individually or in teams, a new innovative startup, and offers the opportunity to apply for a one-year entry visa for self-employment in our country. Furthermore, if you look at the data, the unique individuals involved in the Program are around 433, they are not numbers of a country that is confronting itself with the ambition of becoming a point of reference in the field of digital entrepreneurship and startups.

Here again, Estonia is the master case: e-residency allows anyone, worldwide, to apply to become an e-resident of the country and set up a company there, also allowing people residing in non-EU states to obtain easy access to the Italian and European markets.

9. Cut down the INPS for startup salaries

Currently, the tax burden of INPS on startups is still too high: many young companies in Italy decide not to hire their founders, but to pay a minimum basic salary in VAT mode. If the taxable amount for the purposes of calculating IRPEF is not so high and therefore not a big problem, INPS contributions reach 27%. In Denmark, self-employed employees may or may not pay INPS contributions. In fact, this is too high a figure for entrepreneurs who have yet to start generating profits and who find themselves forced, among the many risks of an early-stage startup, to also bear the cost of maintaining INPS.

Business activity is stimulated by creating incentives – usually financial ones – or by sharing an innovative vision. Every time an entrepreneur interfaces with a bureaucratic apparatus, which may not necessarily be the PA – think, for example, of a bank – the objectives are not aligned because each part has a different purpose.

What to do, then? It is necessary to work to arrive at an alignment and a common vision – which is shared and communicated by those role models we have talked about and to build, step by step, a startup-driven nation.

This a challenge that can no longer be postponed, also in light of the new government’s choice not to have a delegation or an undersecretary specifically dedicated to startups. It would have been an incredible opportunity for everyone: first of all, because it would have boldly surpassed the previous government which, although highly prepared, did not – let’s face it – have a startup agenda. Secondly, it would have created the first case in Europe of a “startup minister”: South Korea has established one with excellent results. And finally, it would have given a wonderful signal to those looking for a beacon: Italian startups. Read the article in the original (Italian) language here.

To see the Italian Ecosystem map in high resolution, please, sign up for our Monthly newsletter.

Startup Wise Guys is one of the most active accelerators in Europe dedicated to early-stage startups. In addition to Italy, it also provides acceleration programs in Estonia, Denmark, Lithuania and Latvia, Spain, Romania, and Africa in various sectors, including B2B SaaS, Fintech, Cyber, Sustainability, and XR. SWG has around 300 startups in its portfolio, more than 600 founders, and over 213 million euros raised by startups in its network. With a success rate exceeding 80% and 11 exits, SWG’s acceleration and coaching approach is based on practice, not on simple consultancy, and aims to help teams be prepared to be best positioned to deliver sessions of fundraising and capital increases within six months.

We’re delighted to announce the launch of our fourth SaaS Milan acceleration program – showcasing 11 cutting-edge teams that have made it...

We are thrilled to unveil the latest Wise Guys Fintech 5 batch, with the teams that have kicked off an intensive 5-month acceleration program journey...

We are excited to introduce you to 10 international teams that are kicking off our first-ever XR program batch. The program will run from June to...